Learn how to smoke a London broil so it rivals even the most tender steaks. When cooked low and slow, like in our Sous Vide London Broil recipe, smoked London broil produces tender and juicy slices of beef infused with a bold smoky flavor.

This London Broil smoked recipe utilizes a Mexican-inspired marinade, however you can easily replace it with a classic mix of butter and herbs, as utilized in our Smoked Lamb Chops, Smoked Beef Tenderloin and Smoked Prime Rib smoker recipes. 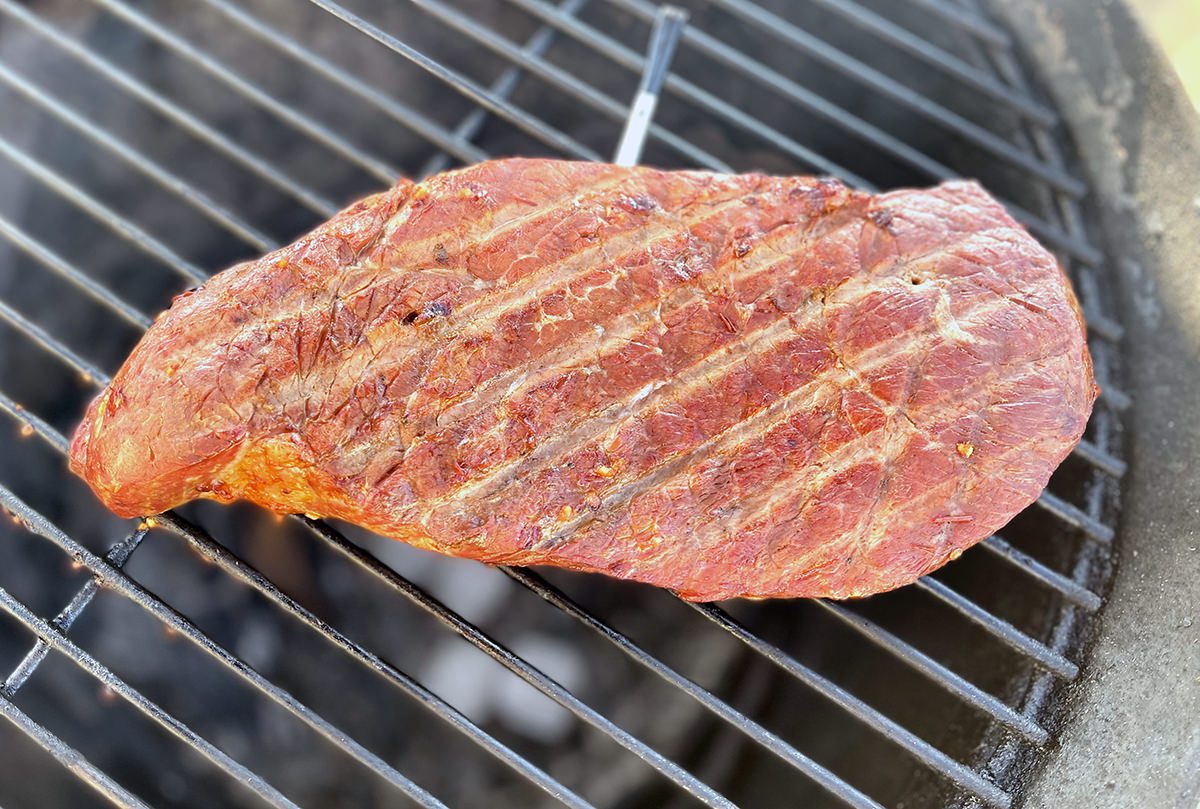 London Broil on the smoker is the best way to extract the softness that hides within this tough cut of beef. Top Round London Broil and Flank Steak London Broil are cuts of beef that require a bold and penetrating marinade and a low and slow cooking process to tenderize and maintain moisture. By reverse searing the meat you lock in the moisture and create a perfectly seasoned crust to compliment the tender interior.

Our London Broil in smoker recipe uses a simple, yet flavorful, marinade comprised of Chipotle peppers, honey, garlic, olive oil and salt.  Once the marinade ingredients are combined, just slather it on the beef and let sit a minimum of 4 hours up to 12 hours. Anything more than 12 will cause the meat to break down and get mushy. Anything less than 4 hours won’t let the meat benefit from the tenderizing the marinade provides. 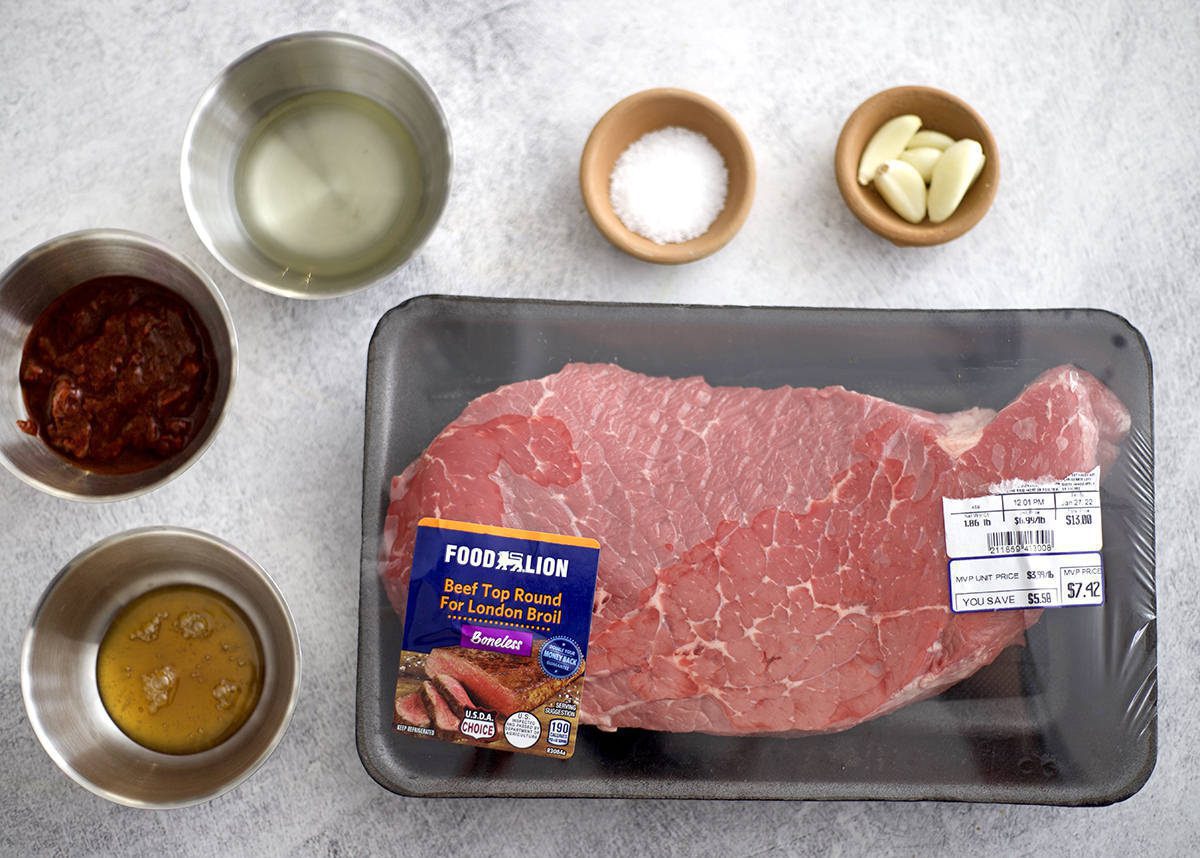 What Cut Of Meat Is London Broil

London broil isn’t actually a name for a specific cut of beef. It’s an American dish referring to the method of cooking. While historically “broiled”, hence the name, London Broil is typically labeled “top round” or “flank steak”. Although we’ve been to plenty of grocery stores who do use the “London Broil” name on the label these days. 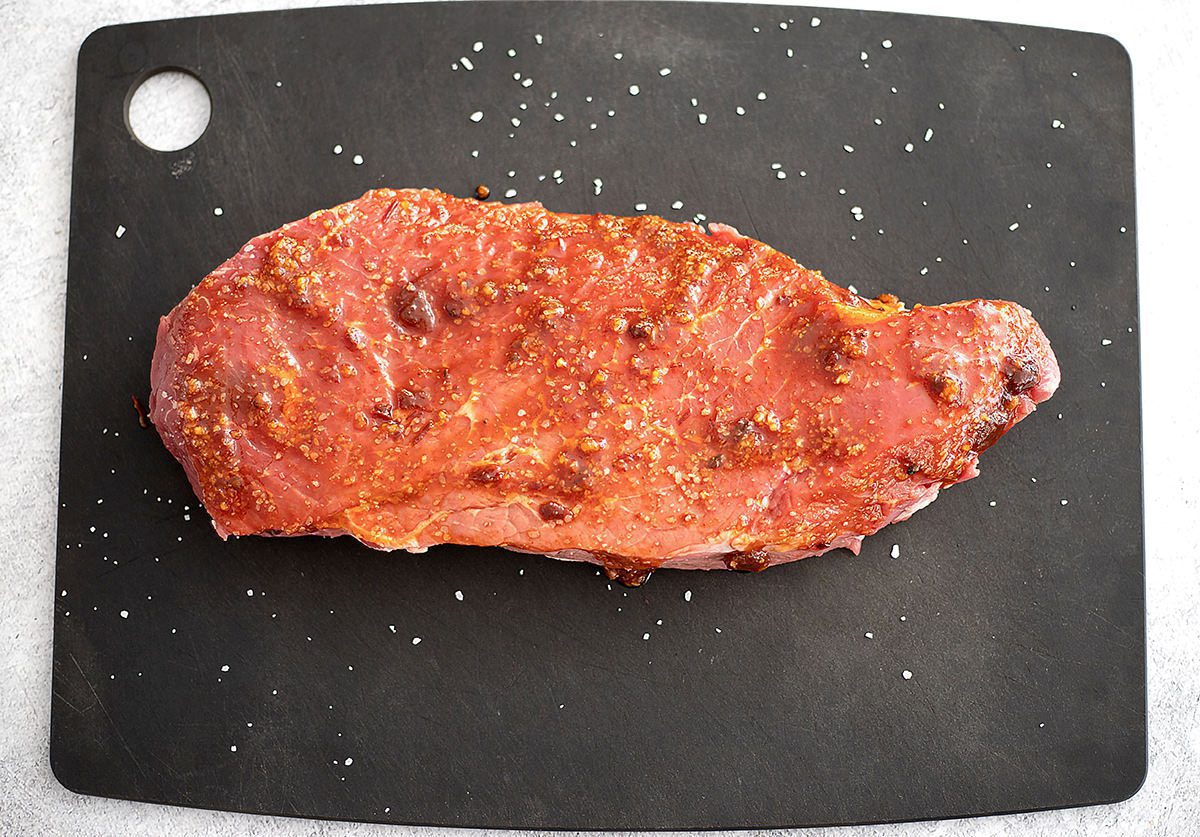 How Long Should I Smoke A London Broil

To smoke London Broil to medium-rare, plan on a 45 minute cook time at 225 degrees F. If your meat is thinner or thicker than 1″, the time will adjust accordingly, obviously.

Cook London broil by temperature, not time. Here are the “final doneness temperatures”. Your “pull from the smoker” temperature will be 5°F below the temperatures called out below as reverse searing and resting will increase the temp.

If you select Top Round London Broil, we highly recommend you don’t cook it past 145 degrees F. It will be tough and not enjoyable. If well-done is your thing, you may want to skip London Broil altogether.

* The USDA recommends cooking steaks and roasts to a minimum of 145 degrees F for safety. 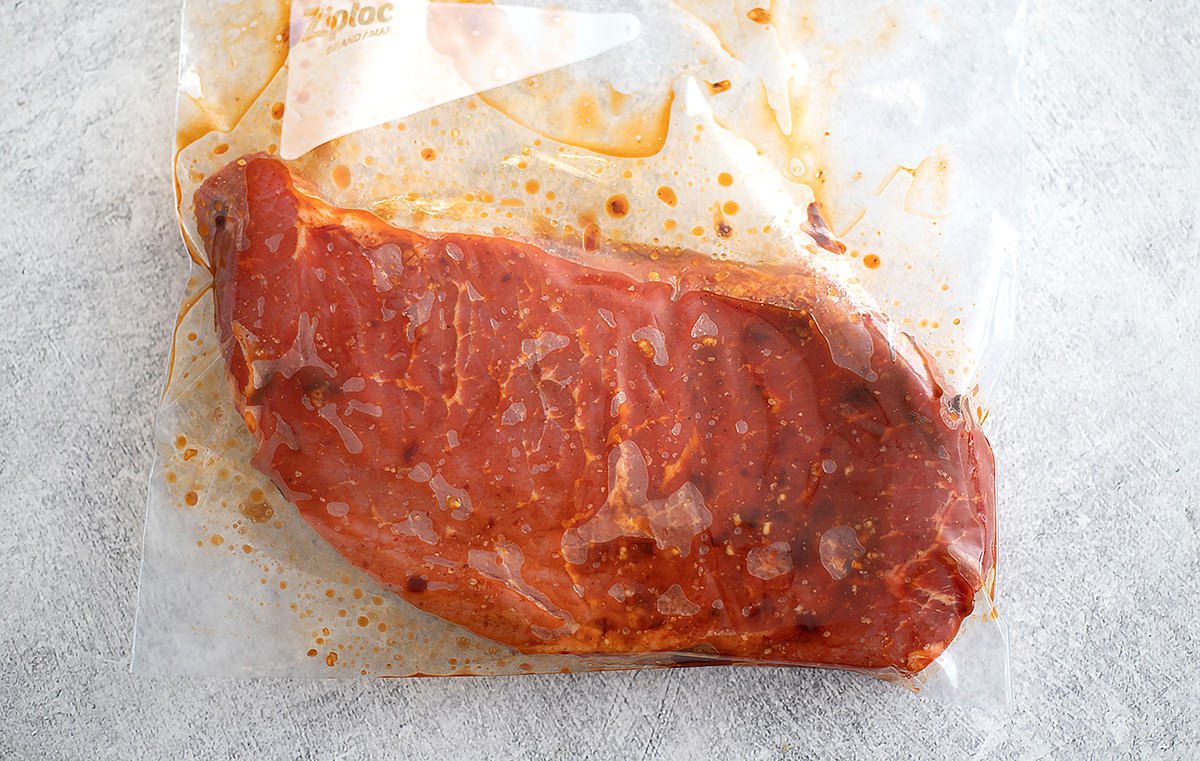 How To Cook London Broil

This London Broil recipe works great on an electric smoker, gas grill, or manual smoker. We provide instructions for all methods. Just make sure you have the supplies called out below.

The smoke should compliment the smoke London broil, not overpower it. As such we stick to cherry wood, apple wood, pecan or oak. 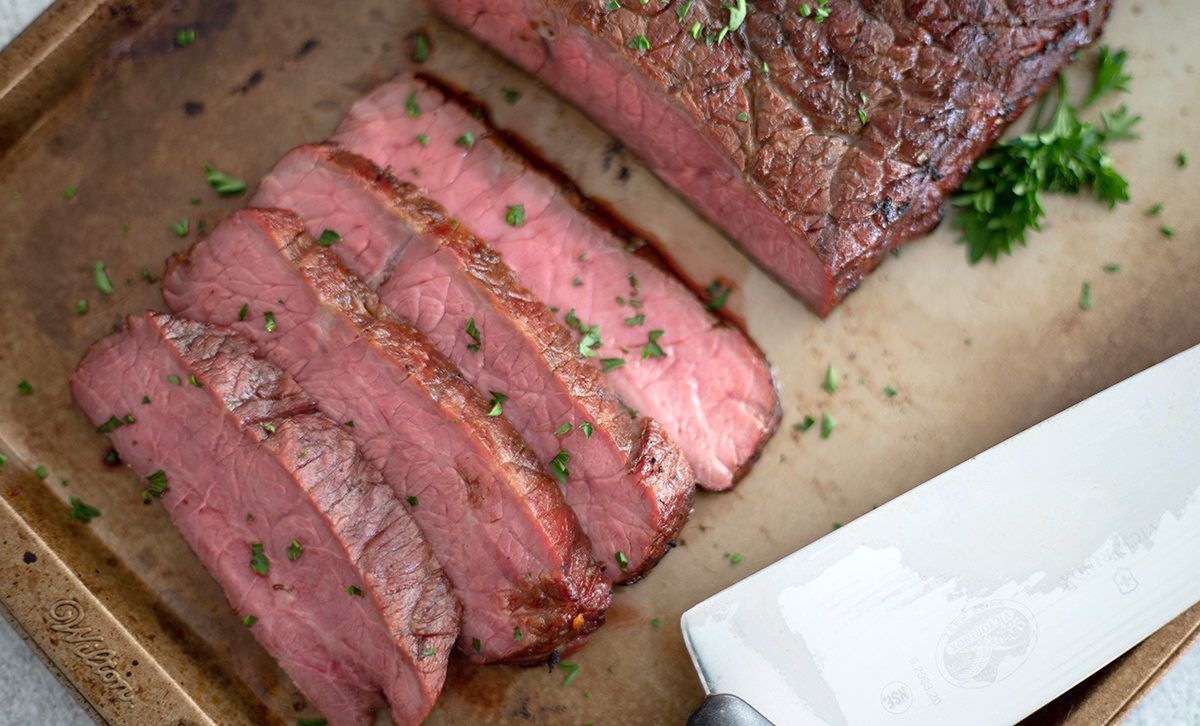 Anything goes when it comes to beef recipes. We’re always a sucker for potato recipes or smoked vegetable recipes, but the list of side dishes that go with this smoked London Broil recipe is long! 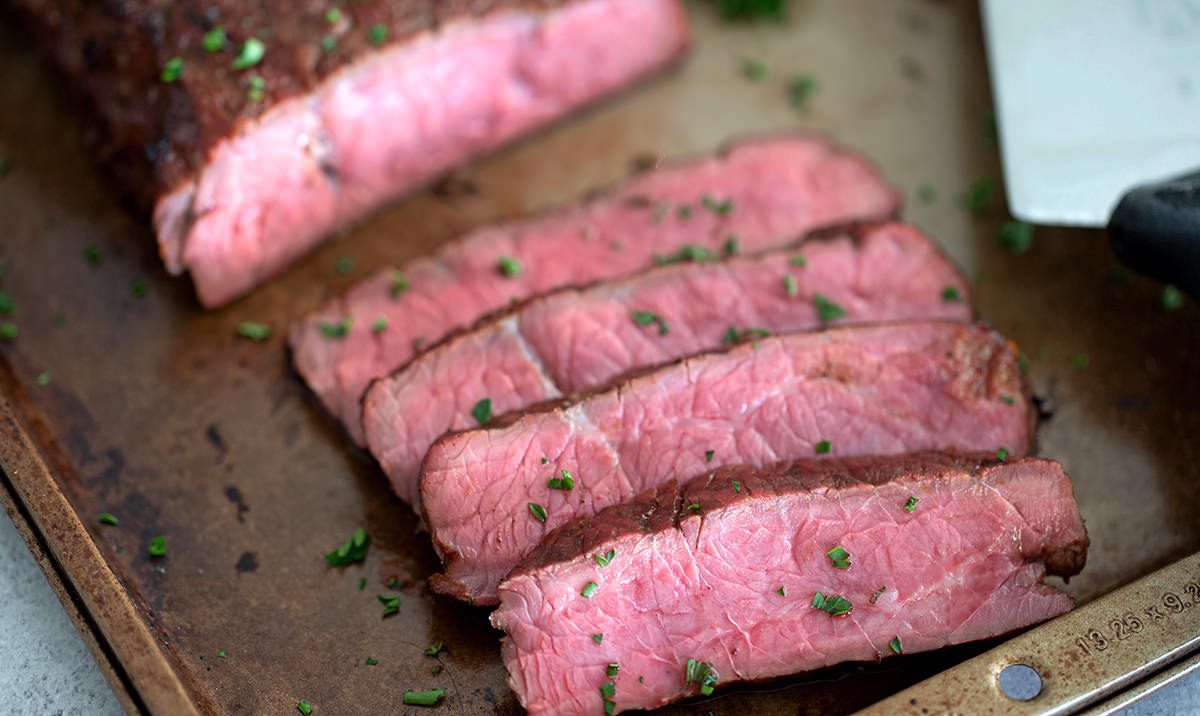 Note 1- Reserve searing creates a LOT of smoke. Turn on the oven fan or open the windows, before turning the oven on, to get ahead of it a bit. Expect it.  Marinade recipe from NYT.